This time next year, Ikea will be open in Grand Prairie.

The Swedish home furnishings superstore breaks ground on its Grand Prairie store this morning at 10:30 a.m. It's the biggest new retail project in the southwest Dallas suburb since Grand Prairie Premium Outlet opened in 2012.

The 290,000-square-foot Ikea store will employ 300 people when it opens in fall 2017. Ikea first announced its plans for a second store in the market last year. Its first store in North Texas opened in Frisco in 2005.

Is this brand fading a little? I do not know at all, but seems like Ikea would be seeking an intown location (mixed use new urbanist) as much as another suburban location.

And is Grand Prairie the North Texas sleeper-city? There's been all sorts of stuff happening in GP, but it seems mostly buried under the Plano/Frisco and Uptown/Downtown machines.
Top

It's clear from attending the groundbreaking that GP is on the cusp of a major development cycle on the south end of the Turnpike at I-20, all of the land surrounding IKEA is vacant and all of it is now in play, according to the Mayor. On the other side of 161 near the Police station is the Epic, which is well underway and should also open next year.
Top

So Much growth over there!

Also, I hadn't realized that IKEA had already announced it's 3rd store to open in 2019 in North Ft. Worth, becoming the 3rd market in the US behind NY-NJ and Southern Cal to have 3 locations.
Top

Much like Frisco developed after IKEA went in there, 1 million sf of retail plus hotels and recreational activity will be a great driver and welcome sight for those that live in SW Dallas county, not real happy about all the parking lot space and wish more of it were geared towards a better-mixed use type development but will have to see what else pops up.
Top

I was surprised to see that Ikea GP already has a triple facing sign in there yellow font/blue background up already. It's at PGBT and 30. Hopefully no one is mislead into thinking it's open already and finds a half finished shell of a structure instead.
Top

There is another one at I-20, have wondered the same thing. They are just now enclosing the building with the signature blue exterior.
Top

Their website and apps even recommend the GP location like it's open. Only under closer inspection will you find confirmation that the GP location has not opened yet.
“Growth for the sake of growth is the ideology of the cancer cell”
Top

Grand Prairie Mayor on Business Boom: 'It's Our Time to Shine'

The DBJ (and WFAA/8) are saying the Grand Prairie store will open December 13.

Besides this store and Frisco (which has been around since 2005 already), there are locations in Houston and Round Rock, plus 2 upcoming: Live Oak (San Antonio area) in summer 2019, and the one in Fort Worth (summer 2019 also).
Top

The large scale entertainment component of Arlington/Grand Prairie is impressive and growing. I'm still waiting for the Lower Midcities to wake up and smell the roses with a good commuter train to downtowns Fort Worth and Dallas, and DFW airport.
Top

^The water park is almost finished and will open in November, just before IKEA opens.
Top

Tnexster wrote:Grand Prairie Mayor on Business Boom: 'It's Our Time to Shine'

I didn't see any formal announcement but the Epic Towne Crossing is fully under way. Lot of equipment and dirt moving on both sides of the tollway. Also appears to be another parcel underway just south of Ikea. The store opens in a few weeks.
Top

The Ikea store opens tomorrow. It will the the chain's 9th store to be built with just a single level of space. It will be Ikea's 47th US store.

A 20-pic slideshow is included in the linkie.
Top

Epic Waters sounds pretty cool - an indoor water park as a rec center, but it's pricing is kind of high-$19 for GP residents and $29 for non-residents. A nice local attraction but at that price is competing against legit water parks, and I'm not sure it stacks up. We'll see.
Top

Some of the new stuff opening up around IKEA. Nothing really shocking here, lots of the usual suspects.

Chick-fil-A, El Pollo Loco, Starbucks and Chipotle will open on pad sites around Walmart on State Highway 161 and Pioneer Parkway. A Courtyard by Marriott, Smoothie King, Jimmy John’s Gourmet Sandwiches and Jason’s Deli are also planned on the SH 161 corridor between Arkansas and Mayfield.

Potbelly Sandwich Shop, Olive Garden, Ross, Michaels, Ulta, Burlington, Conn’s, Petco, Burkes and Home Goods are expected to open in Epic West on the west side of SH 161 between Warrior and Mayfield.

Hooters will open a new 7,500-square-foot restaurant on the north side of I-20 just west of Great Southwest Parkway in the old Johnny Carino’s building.

Mr. Crab’s Chinese restaurant will open on Bardin Road behind Walmart on I-20.

T-Mobile will open a store on the west side Carrier Parkway just north of Conover.
Top

Not to be left out of the convention/conference center space race apparently Grand Prairie is about to ink a deal for twin 7 story hotel towers bookending a conference center that will be built in the Epic Waters area in a now vacant space fronting a small lake, the lake will then have restaurants that over look over the water and connection to a trail around the lake and some water based activities like paddle boats. Epic Waters itself has seen a good year and has crossed the 300,000 visitors mark with much of that coming from out of town guests.

Heard all this in a presentation by the city today.
Top

I wondered how the water park was doing since it opened.
Top

The other notable thing I heard today was that they have something like 6,500 mf units planned, likely most of those towards the south end of 161.
Top

I had never heard of them so am curious about it now.
Top

Found this today, not sure how far along this process is or if it is at all but would be a significant change along I-30.

I had never heard of them so am curious about it now.

Yeah it's a quickly growing furniture store they just opened the first texas store in pflugerville and the next one will be in the san Antonio area.
Top

Tnexster wrote:Found this today, not sure how far along this process is or if it is at all but would be a significant change along I-30.

Very significant. I hope, though, that the city didn't wait too late in the game to have a signature urban-center type of area. The current urban/suburban hotspots around here are miles ahead of GP development-wise. So far, it looks like other projects, especially along I-20, TX 360, and the south end of TX 161-Bush Turnpike are attracting retail/restaurant attention. Would be nice to see at least some of this eventually be part of GP's future (if this project does get going).
Top

More retail is coming to the area around the Ikea store and Epic Waters water park, including Burlington, HomeGoods, Ross, Michaels, and more. A Main Event location is also going up near the water park. The article says Epic Waters had more than 300,000 visitors last year, and is now in the process of adding a wave pool.

I went opening weekend. I was not impressed. It looks good from a distance, but it’s not great quality & you can point out the many retailers they are emulating. But overall, I’m sure it’ll be a hit with budget conscious family’s. It’s like a NFM for the southern half of DFW.
Top

The 150,000-square-foot office building is part of a mixed-use project called Mayfield Groves that also includes apartments and retail.

A California-based apartment builder has purchased property in Grand Prairie for a new project.

The property is south of Interstate 20 year Joe Pool Lake.

Construction of new hotels, restaurants begins at Grand Prairie’s Epic Central
A ceremonial groundbreaking Thursday kicked off construction as part of a massive public-private partnership at the city-owned property in Grand Prairie.

One hotel will be a Hilton Garden Inn, with 129 luxury rooms, executive lounge, restaurant, pool, fitness room and business services. The other, a Homewood Suites, will offer 147 studio, one- and two-bedroom suites with full kitchens. 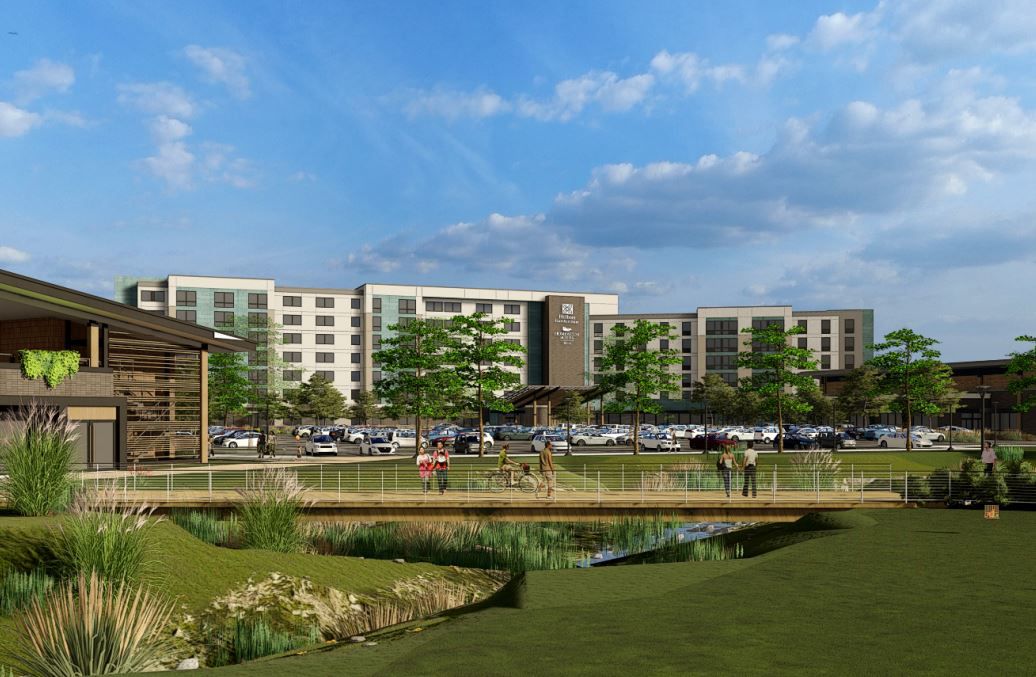 The city is building six restaurant shell spaces that will open in late 2022.

Restaurants will include Vidorra Cocina de Mexico; an unnamed modern American concept; Serious Pizza, Sliders and Shakes; and a new breakfast and brunch spot called Poach’d. A fourth space will become Loop 9 BBQ, an upscale barbecue restaurant by Larry Levine, the founder of Chili’s. The city said it is entertaining options for the sixth restaurant space.

Grand Prairie development will bring housing and retail
Mixed-use project on State Highway 161 will include apartments and townhomes.

Construction has kicked off on a Grand Prairie real estate project that will bring housing and retail buildings.

Called Midtown GP, the 56-acre development is being built at State Highway 161 and Forum Drive, just north of Interstate 20. Kalterra Capital Partners is building the mixed-use project, which will include townhomes, apartments, shops and restaurants. 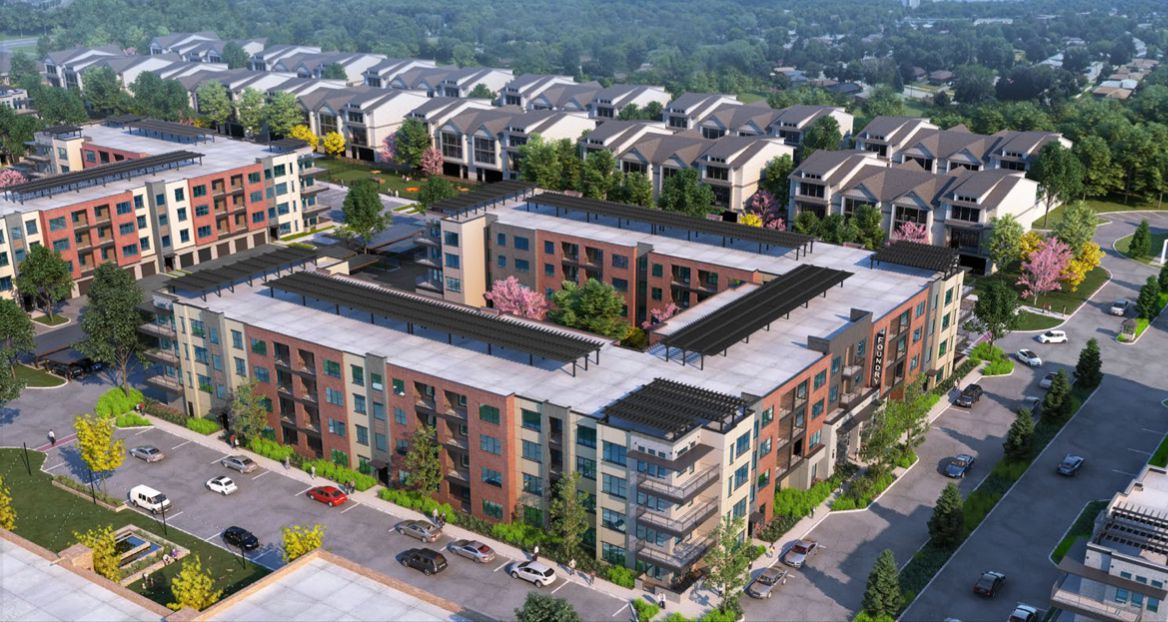 Why is Grand Prairie draining a lake at the EpicCentral development?
Details about a major water show feature of the lake will be released this summer.

More details about the water show will be released this summer.

Outside the Lines, a specialty construction company, is designing and installing the water show. The company, which is based in California and has an office in Dallas, has designed water shows at Texas Live! in Arlington and Legacy West in Plano.

In addition to the water show, EpicCentral will eventually include two new hotels, a large outdoor open space and several new restaurants. The 172-acre park lies along the George W. Bush Tollway near Arkansas Lane.