Nice. We need more and more of this type of infill.
Top

If Cindy's Deli can survive the construction, she'll be in an enviable spot wedged between two business hotels and across from the Courthouse. Should be good business all day long.
Top

Really like the little improvements happening in this area between these and 400 Record. I don't recall seeing anything, but has there been a new tenant for the soon-to-be-former DMN headquarters?
Top 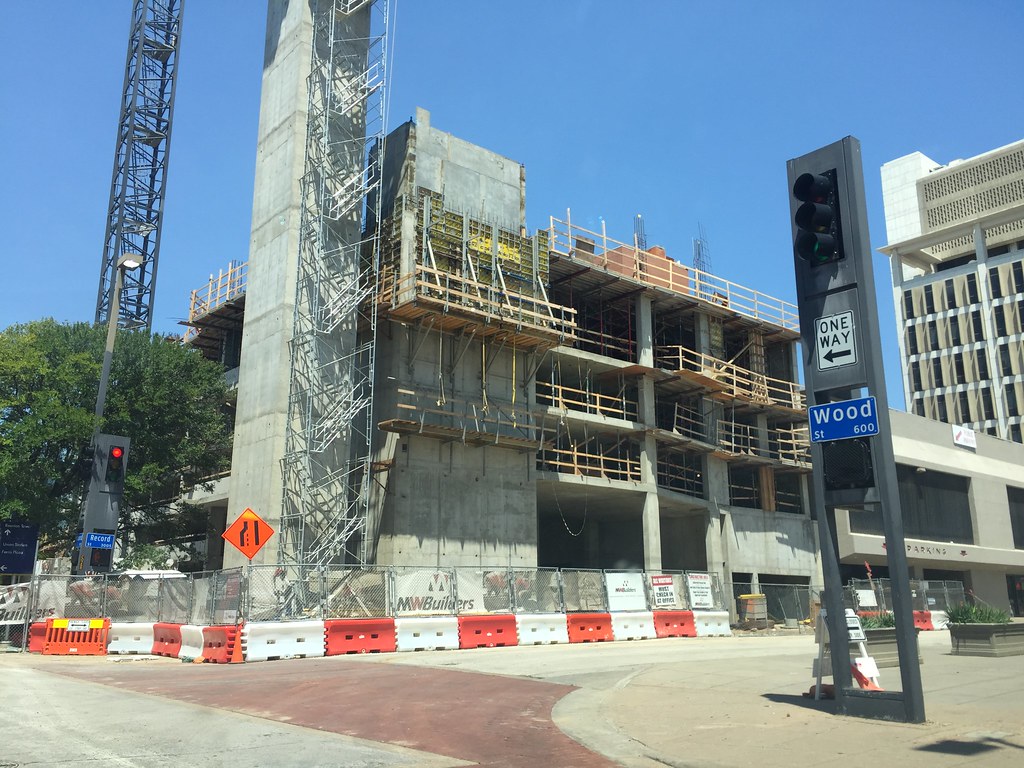 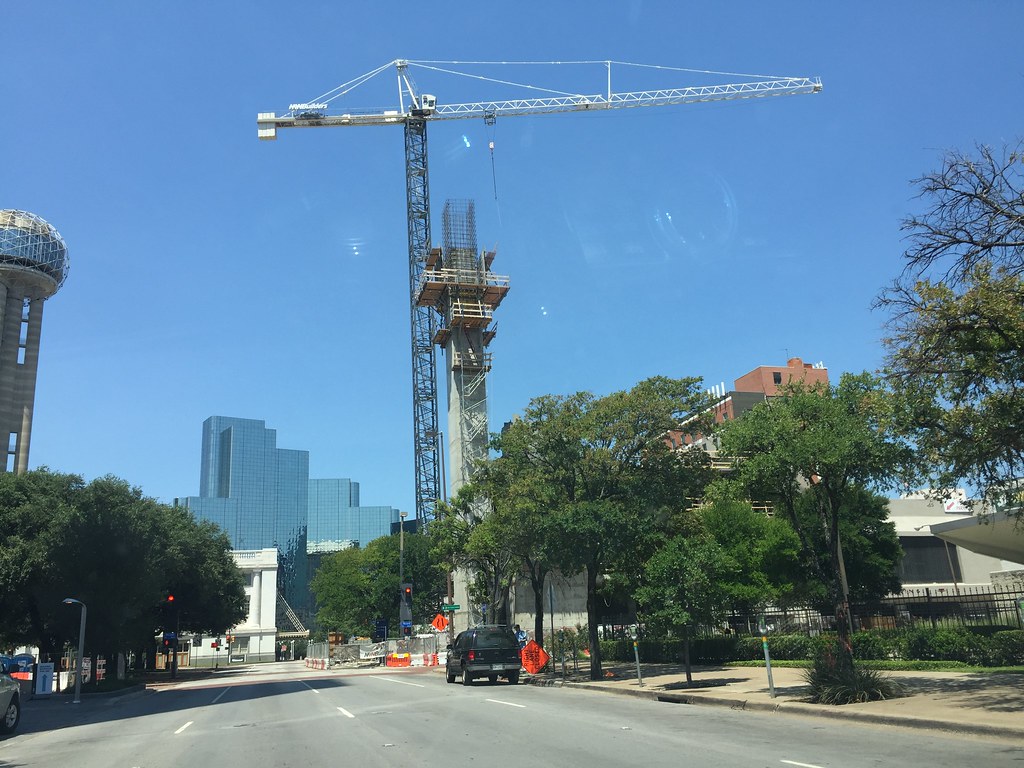 So what is this next to Cindi's, the parking garage entrance?
Top

That end of downtown is a great place for small infill projects like this. Apartments, hotels, etc.
Several small surface lots around there would be ideal for infill.
Top

Hopefully these new projects will bring enough people to drive down the crime in this area. My friend works in a building near by and they have had huge problems. A big appartment complex might be a great thing for this area... residents could perhaps get the city to spend more resources to keep the area safe. Of course the best thing would be to move the bus station...
Top

gshelton91 wrote:Hopefully these new projects will bring enough people to drive down the crime in this area. My friend works in a building near by and they have had huge problems. A big appartment complex might be a great thing for this area... residents could perhaps get the city to spend more resources to keep the area safe. Of course the best thing would be to move the bus station...

Greyhound and McDonald's are the biggest perpetuators of crime in the area.
Top

That McDonald's location would make a great residential high rise site but I know it's not going anywhere.
Top

Construction site has a slightly updated rendering. This version seems to have less glass and none of the little portholes from the last version.

Tnexster wrote:That McDonald's location would make a great residential high rise site but I know it's not going anywhere.

The NE corner of the Greyhound bus terminal would make for an interesting flagship McDonald's.
You do not have the required permissions to view the files attached to this post.
Top

Not the most exciting project in the CBD but certainly not the most obvious lost I would have seen turned.

Imagine, 10 or 15 more lots turned in to mid-rise projects like this. It would at a few thousand more people in and around the CBD and enrich the urban fabric from block to block.
Top

Hopefully 10-15 more mid rise Apartment buildings- there are ENOUGH hotels downtown. It's almost borderline comical how many there are.
Top

It has a similar presence as the high rise that once stood in this location, the Hotel Jefferson. About the same height and size as well. 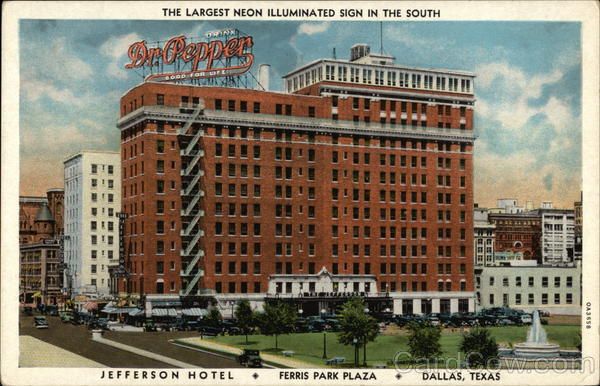 After this will Downtown have enough hotels???? Hopefully. Seems already like way too many to me.

This building is hideous by the way
Top

hjkll wrote:After this will Downtown have enough hotels???? Hopefully. Seems already like way too many to me.

More to come somewhere...look at the limited number of hotels in all of Uptown, with so much offfice, residential and entertainment.

Look at it this way.

The demand is for hotels in Dallas is incredibly high. Why? Because we are becoming a central business mecca for North American commerce. The fact is, we just might not have enough, yet, to satisfy demand.
Top

Hotel inventory in the CBD has been below 'should be' anticipated levels for decades thanks to a nice string of events, some common across the country, some unique to The Metroplex:

-Like most growing Sunbelt populations centers, White Flight suburb building destabilized the central city sending much of hotel inventory growth toward the edge of town. New & improved schools in the new & improved neighborhood got all the attention and resources, up to date abundant highway access, preferred retail destinations, new office buildings...

-DFW Airport is very much in the ~middle of the population center greatly increasing the convenience of a near-airport hotel location. Even with the rise of Collin County, the big airport is still roughly central and convenient for area residents and over-night visitors. There's always a hefty collection of hotels near a big airport, but in DFW the concentration has been advanced by an airport location convenient to business centers, shopping destinations, entertainment/tourist venues and residents.

-The recessions of 1980s was wild enough for everyone, but in the Fossil Fuel economy of Texas crashed hard and made everything worse. Dallas, specifically the CBD, was double-D devastated thanks to the crony-conoclastic S&L and Real Estate meltdown. I believe most of the white collar criminals never got investigated, few were punished. But the city suffered in deep freeze because of it, sending whatever moxie was left toward the edge of town.

-Despite all of this, the CBD/greater downtown comprised the biggest employment center, but the allure of suburban newness usurped overnight stay desirability. The convention center has always been popular, but for a decade or so the regional dynamics created unhealthy relationship as CBD hotels became overly responsive to Convention Center activities decreasing variety of hotel type.

All of this contributed to a downtown hotel room inventory about a quarter of what would be typical. Since 2010, hotel inventory has increased in the downtown area, and the type of rooms available have expanded; the increase hasn't really kept up with the neighborhood, though -- we're just now beginning to see the return of venue variety. Expect to seem many more hotels, and a huge increase in variety and style.
Top

I'm not concerned about the amount of hotels opening in the CBD. As stated before, demand is catching up especially in the mid-priced and budget range. Notice how it's mostly Mariott, Hampton Inn, Cambria (Choice Hotels), La Quinta and only one high-end hotel, The Statler.
Top

The Drever should be as nice or nicer than the Statler when it is done.
Top

I can see from my office at Renaissance Tower that the construction scaffolding is coming off of this one now. Honestly, it looks worse than I expected. Lazy design. Uninspired color palette. Cheap materials. Complete unawareness of - if not outright contempt for - the nearby public spaces.

This thing needs to be out by the airport next to an Olive Garden, not on Houston Street in downtown. But at least it's not a parking lot anymore.

I can only see the North and East faces from here but I'll try to walk by sometime soon and get photos.
Top

This one when completed will almost certainly outshine the rendering.
https://samclarkjr.myportfolio.com/work
Top

I don’t think it’s that bad.

Having the garage access on Houston is what’s wrong with the project.
Top

This actually looks better in pictures. I don't get this separated elevator shaft that goes straight to the top floor.
You do not have the required permissions to view the files attached to this post.
Top

Is that an event space, perhaps?
Top

If I remember correctly from the original proposal it's an elevator available to the public that would take you to the top level/rooftop restaurant without going through the hotel.
Top

There will be a rooftop bar up there. I can kinda see having a separate dedicated elevator for it, especially to keep the boozywoozys from disturbing the wrong hallway, or those who were there who aren't hotel guests who might have had too much fun on the roof... either way, it keeps the main elevator(s) free for regular guests.
Top

Also according to some newer renderings, I saw there will be a ground floor cafe with a patio on the main doors corner. Originally I felt like they had almost nothing planned around the ground floor so a cafe will be a much better addition. The former small slice parking lot will be a valet/driver-for-hire/drive-thru area for the hotel.
“Growth for the sake of growth is the ideology of the cancer cell”
Top

Having a rooftop destination makes sense then. It's still strange to see in person. Maybe it will all look better once it's finished. That's good news about the cafe. I didn't know about that.
Top

^Glad they agreed to add a patio facing the park. Thanks for sharing.
Top

If they had placed the rooftop bar on the west side, at least it would be a great place to watch the Reunion Tower fireworks every year.

IMG_5845.jpeg
You do not have the required permissions to view the files attached to this post.
Top

Just noticed the signage is up this morning.
Top 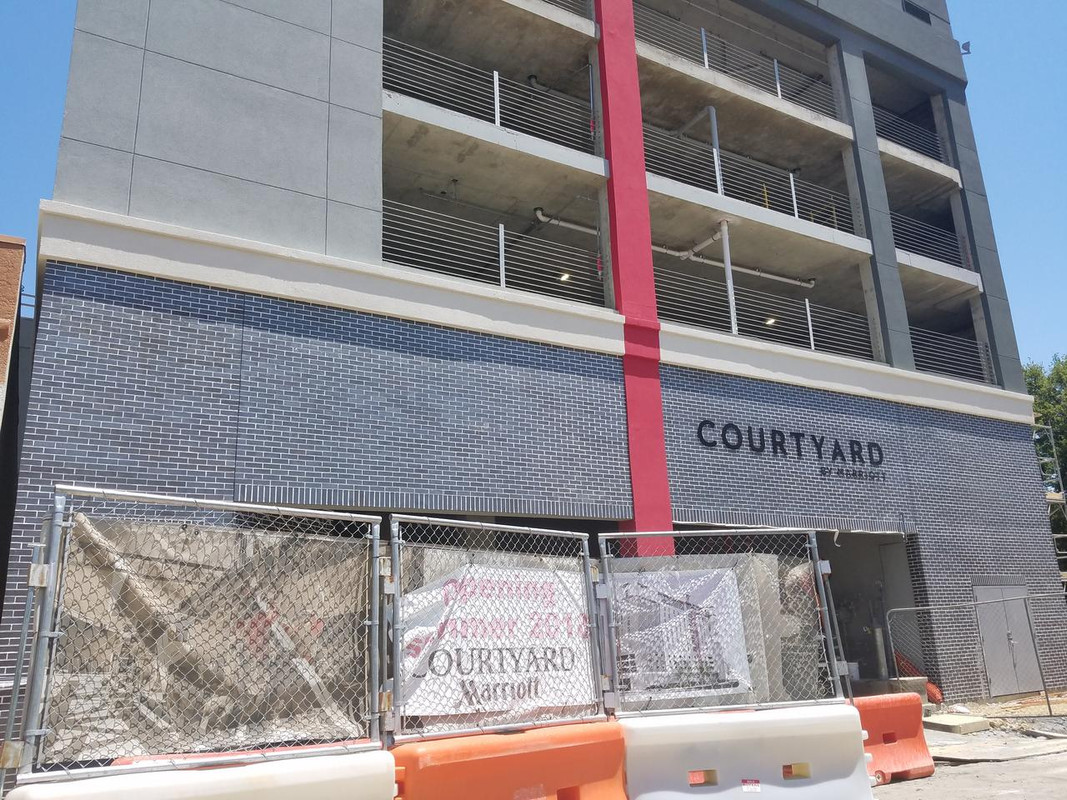 The brick looks nice, actually the colors seem to work although that red kinda looks like a giant red ribbon.
Top 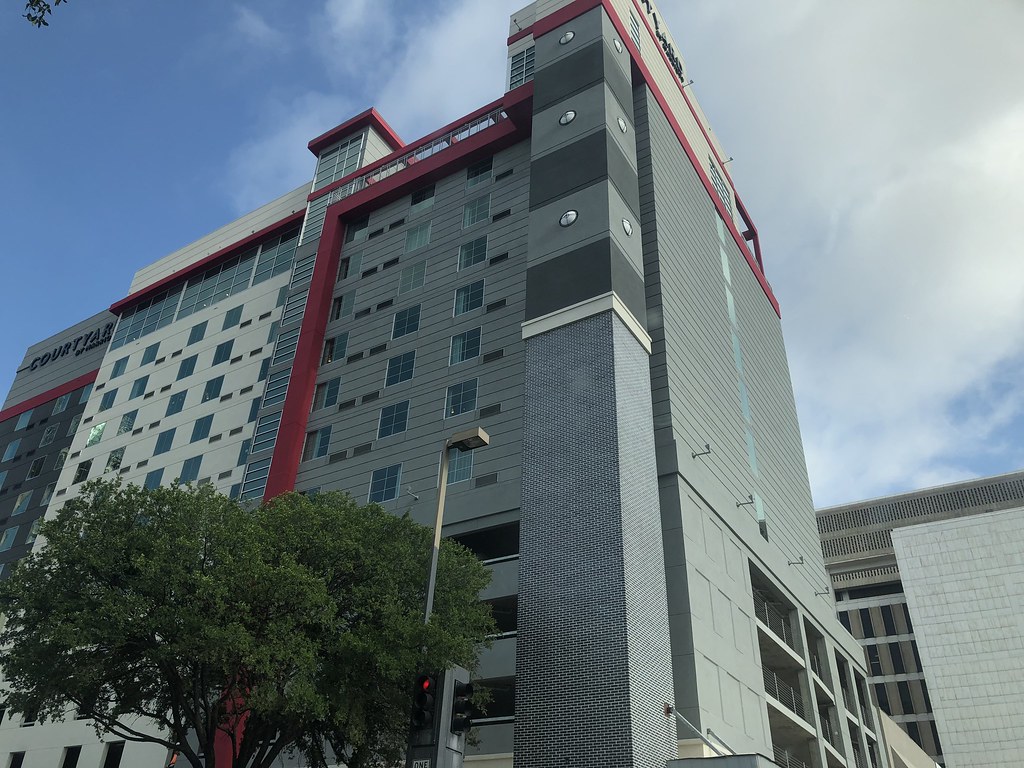 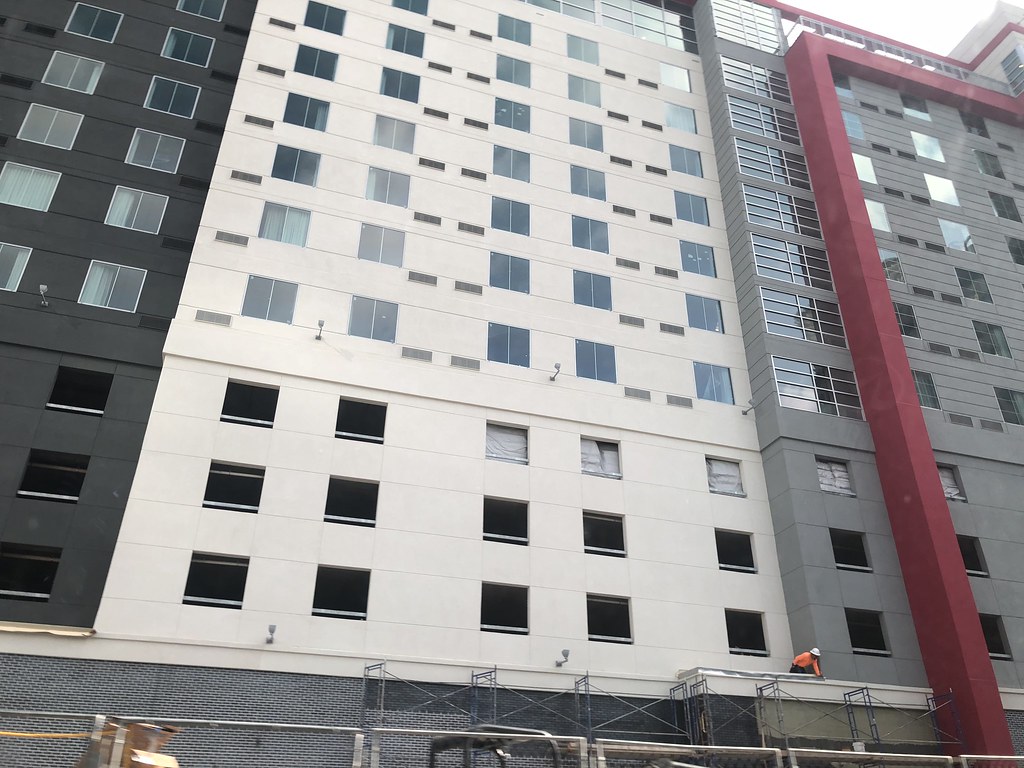 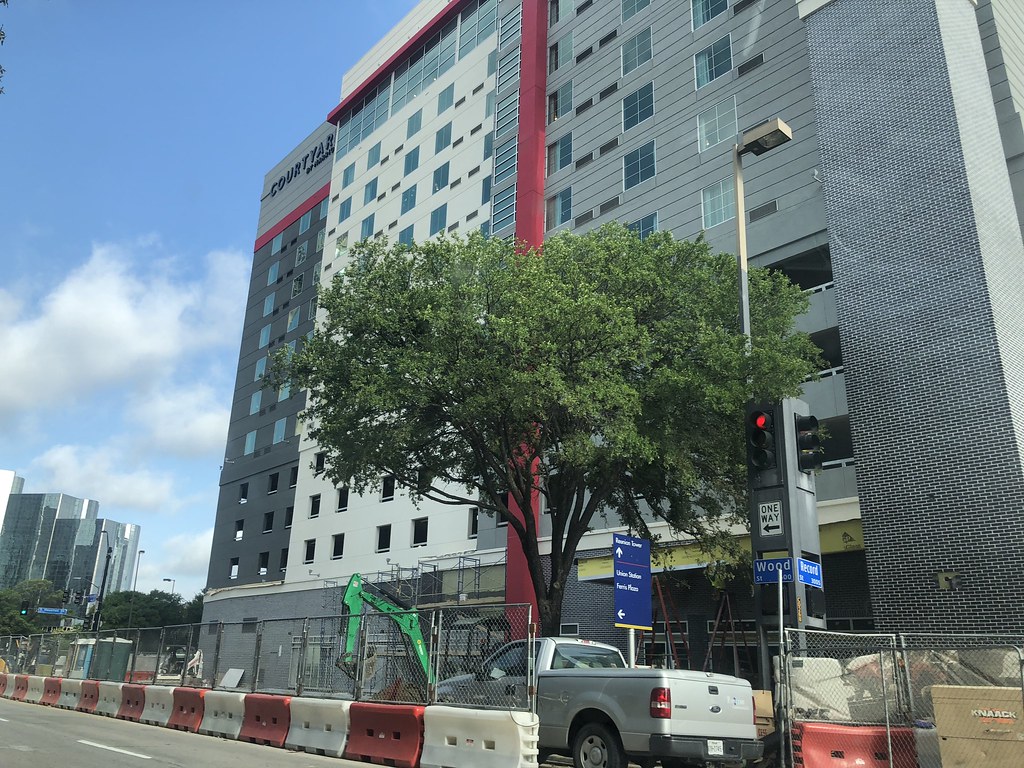 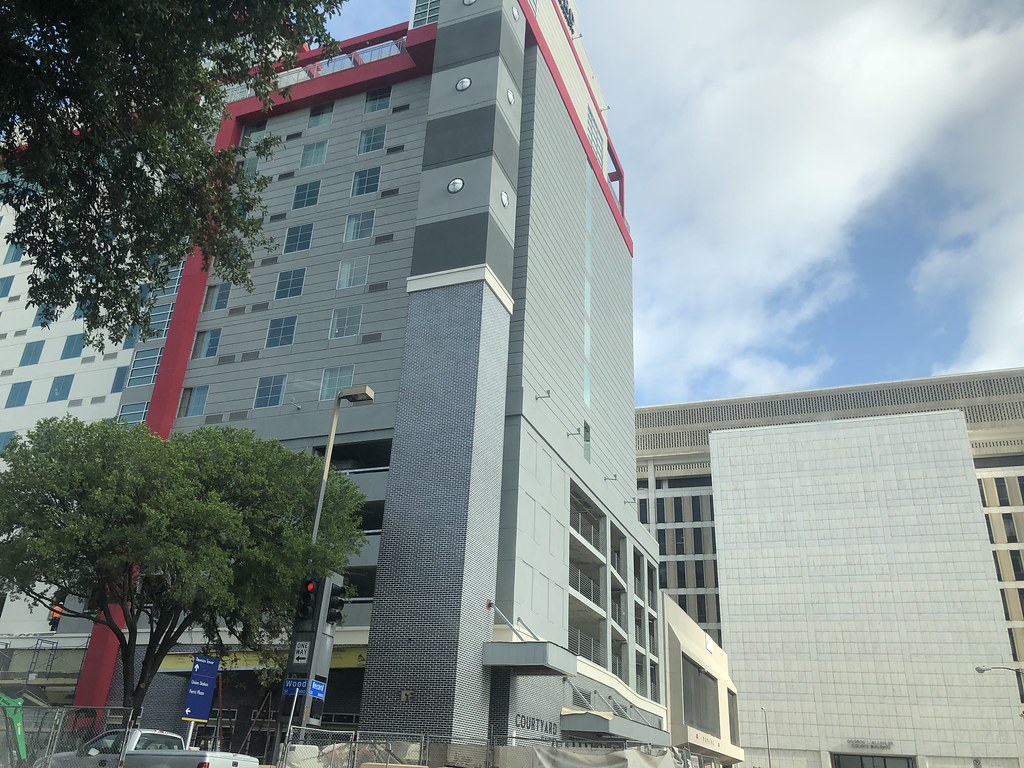 It's just one of the most awkward buildings I have ever seen built. It won't have trouble selling rooms though because of it so we just have to live with it until they repaint it in 10yrs and make it look worse somehow.
“Growth for the sake of growth is the ideology of the cancer cell”
Top

It does look a little suburban to me, like it would be a great fit here in Las Colinas... But if I'm being honest I don't hate it! It actually turned out much better than I thought it would.
Top

I hate the color palette.
Top

It looks like a legos project.
“Growth for the sake of growth is the ideology of the cancer cell”
Top

It actually looks better than I was expecting.
Top

I see it every day and think it looks nice.
Top

It looks vaguely Scandinavian to me—our Swedish and Norwegian tourists will love it!
Top

From today.
You do not have the required permissions to view the files attached to this post.
Top
Post Reply
124 posts