by jrd1964
Yesterday I saw 2 street name change proposal signs, one at I-635/Plano Rd., the other at Plano Rd./Miller. They both mentioned Plano Rd. changing to Lake Highlands Dr. I didn't get to go farther north, but based on what I saw, I would guess the change would affect most of (if not all of) Plano Rd. inside the Dallas city limits. I also didn't get to see Richardson's or Garland's take on it; my assumption is that they won't do anything and leave the name alone.

I remember quite a while ago there being plans for a possible name change, but nothing happened about it at the time.

by LongonBigD
Seems like I saw something that the proposed change was to be within I-635. Does that correspond to Dallas city limits? I don't think they were changing in other cities ... because it's the road to Plano!

by jrd1964
The city limits of Dallas go on up a little farther there. I think on the west side of Plano Rd. it goes up to or near Buckingham Rd., and on the east side north of Forest there is a part of Garland up to or near Buckingham. Both sides are in Richardson north of Buckingham. I thought about I-635 from before, but there was also a street change notice sign about it at Plano Rd./Miller, so maybe it will change that far north (?).

by LongonBigD
The Lake Highlands Advocate reports that the proposal would be to change the name at Forest Lane. It is suggested that with the redo of I635 East, an exit sign for "Lake Highlands Road" would bring visibility to increase name awareness and property values for Lake Highlands. There was a public hearing at Dallas City Council last week, but I don't know was resulted.

If passed, Plano Road would only exist in Richardson because in Plano, it's called Ave K. After Plano, in Allen in changes names to Greenville Ave. It's a Dallas area thing -- one road, at least three names!

LongonBigD wrote: It's a Dallas area thing -- one road, at least three names!

It's not just a Dallas area thing.

by jrd1964
Just heard on the radio in the last couple of days that whoever at City Hall was trying to chanpion this, has decided to pull the proposal in advance of a full council vote. Apparently there has been quite a bit of blowback from folks along the street, especially business interests. The report was brief, and didn't mention whether or not the idea would be tried again in the future. 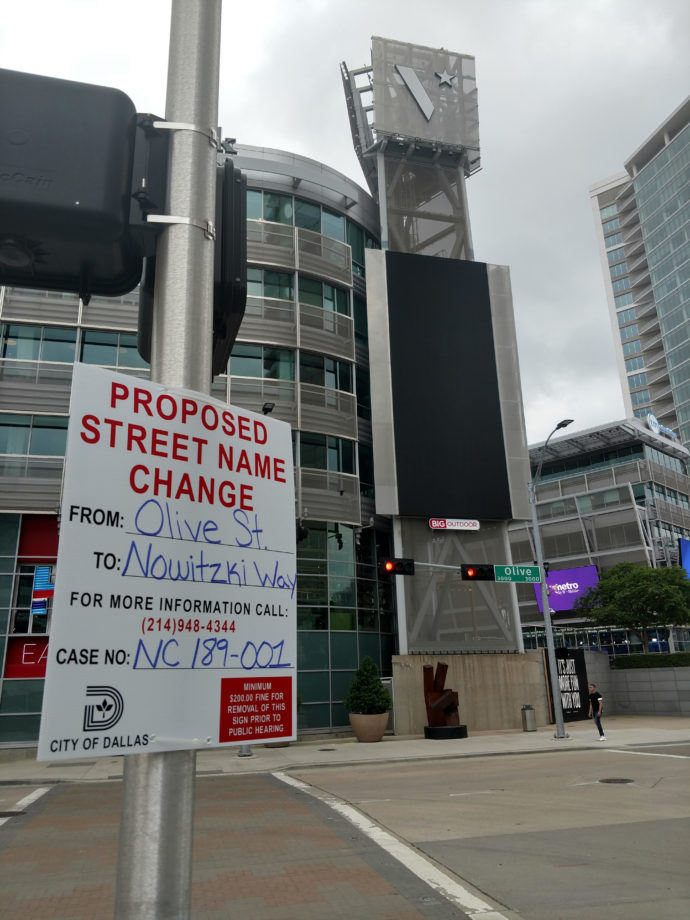 by Tivo_Kenevil
He deserve it tho.

by itsjrd1964
For many, many years, the transition point of Pacific-to-Gaston (or the other way) never was clear. Most of the time, street names change at intersections with cross-streets. I always found it unusual that at Central and at Hawkins, it was Pacific, but at Good-Latimer, it was Gaston. I'm sure there was some obscure explanation for that, such as the transition from Dallas to the formerly-separate East Dallas, or similar. Well, recently (and of course no photo yet), the street signs on the signal light poles at Good-Latimer/Gaston have been changed. Now they show
<== Gaston
Pacific ==>
and
<== Pacific
Gaston ==>

Now, if someone could fix the transition of Easton-to-Gus Thomasson at a railroad crossing (??!!??)....

by itsjrd1964
The date is set, October 30 at noon is when the city plans the street-naming ceremony for "Nowitzki Way", at Victory Plaza.

by itsjrd1964
Some members of the Dallas City Council would like to see a name change for Lamar St. between I-30 and S.M. Wright, to honor the late Botham Jean. The matter has been brought to the City Manager, as the next step in the process.

Great irony -- DPD HQ being located on a street named after one of their innocent victims.

by cowboyeagle05
We have a Rec center named after him. Depending on who you ask that's better or worse.

The resolution, adopted unanimously by the park board, renames Pike Park Recreation Center on Harry Hines Boulevard a mile northwest of downtown. It is now called Santos Rodriguez Center, for a 12-year-old boy shot to death in the early 1970's by a white Dallas police officer investigating the theft of cash from a vending machine.

by Hannibal Lecter
^ I didn't know that. Thanks.

by exelone31
Wow, I had never heard the story of Santos Rodriguez, absolutely heartbreaking.

by cowboyeagle05
Yeah after Hannibal posted I googled it as well and learned the story. The sad thing is the last article I saw said that rec center was in bad shape. Don't know if it was ever improved. I've certainly never been to Pike Park.

exelone31 wrote:Wow, I had never heard the story of Santos Rodriguez, absolutely heartbreaking.

There's a park in Seattle dedicated in his memory as well, but nothing yet in Dallas.

by sdorn
Great shot C Troy!! This sign is most likely gone
All times are UTC-05:00
Page 1 of 1
Powered by phpBB® Forum Software © phpBB Limited
https://www.phpbb.com/